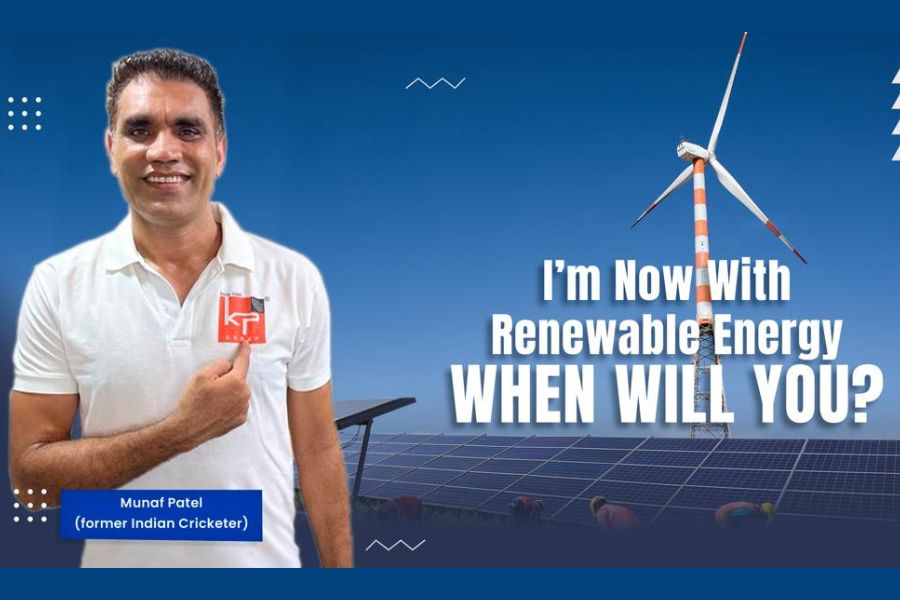 Munaf, 39, terrorised some of the world’s best batsmen by bowling consistently at speeds of 140 kmph along with his famous & deadly reverse swing. His unrelenting pace earned him the nickname Ikhar Express after Ikhar, the interior village in Bharuch he comes from. He was a member of India’s 2011 cricket world cup team and played a stellar role in the world cup victory. Understanding the growing needs of the country, he is now scouting for fast bowling talent that can play at the highest levels.

“We are happy to welcome Munaf Patel, who was the fastest Indian bowler of his time, to the KP Family. Despite coming from a small village and a humble background, Munaf played at the highest level for many years. He has worked hard and because of his continuous dedication to the game, he is an inspiration to many. He has been taking part in various activities of KP Group for some time, but he is now officially a part of the KP Group and a renewable energy warrior,” said Faruk Patel, CMD of KP Group.

“I am thrilled to become the brand ambassador of KP Group, which has emerged as a leader in both wind and solar energy. KP Group CMD Faruk Patel is a man with a vision and aims to make maximum contribution to help the country achieve its renewable energy targets and mitigate the impact of climate change by conserving the environment. I am also impressed with KP Group and Farukbhai’s commitment to supporting various social welfare causes. Farukbhai is considered an idol in our community and I consider it my privilege to be associated with him,” said Munaf.

Incidentally, Munaf’s story is very similar to that of KP Group. Like Munaf, who overcame all the odds to play for India, KP Group also had humble beginnings. Faruk Patel laid the foundation of KP Group with his savings of Rs. 1 lakh in 1994. Today, KP Group spans 34 companies, of which two are publicly traded.

September 10: Gone are the days when people used to get attracted to chemical products by seeing advertisements. Now people are educated and trust their hair and skin with more natural products rather than chemical products. Founded by Sandeep Chauhan with Co-founder Siddharth Chauhan, Delhi-based ﻿Oroglow professional is one such brand that caters to consumers […]

Taral Shah, MD of Shivalik Group, says buyers prefer homes in townships due to excellent infrastructure, amenities, and the lifestyle they offer. Ahmedabad, September 17: With the city growing in size and home prices going through the roof in popular locations, townships are becoming much sought after among home buyers in Ahmedabad. Townships such as Shantigram, […]