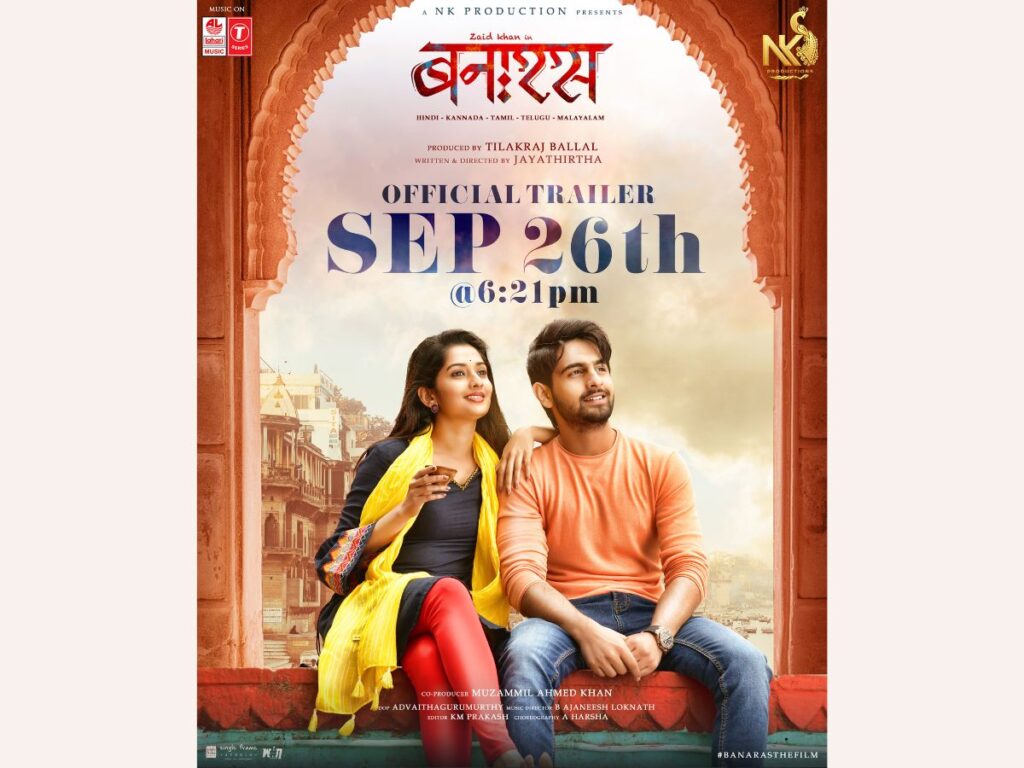 New Delhi (India), September 23: The trailer of Pan India Film Banaras starring Zaid Khan & Sonal Monteiro, will be unveiled on September 26. Inarguably one of the biggest films of the year, from the Kannada film industry after KGF 2, Charlie 777 & Vikrant Rona, Banaras has become the talk of the town because of its impressive motion poster and songs.

Banaras is a Mysterious love story, directed by Bell Bottom fame Jayatheerta.  Major portion of the film is shot in Banaras and has featured all the ghats, Bharat Mata Mandir, Mukti Bhavan and it is going to be a Visual treat for the audience. The complete film is shot explaining the beauty, Rich heritage, Culture of Banaras.
This film Produced by Tilakraj Ballal under the banner of NK Productions and has background score, music by B. Ajnesh Loknath. The film also stars Veteran Kannada Actor Devaraj, in a pivotal role along with Achut Kumar & Sapna Raj. The film is all set to release Pan India on 4th November in Hindi, Kannada Telugu, Tamil & Malayalam languages.

CINELAL, the New OTT Platform is all set to Launch with Original Content by Mrs. Alankrit Rathod

Mumbai (Maharashtra) [India], October 29: CINELAL, an upcoming brand new OTT platform & the brainchild of a dynamic young woman entrepreneur Mrs. Alankrit Rathod is all set to launch with their 7 Over the Top Original Content for the OTT audience across the globe. Cinelal Chairperson Mrs. Alankrit Rathod mentions that the Teams will go […]

New Delhi (India), January 30: Our Indian cinema has a wide history which has given many Craftsmen Directors of all time like Satish Ray, Dada Saheb Phalke, and many more who give birth to the cinema. Indian cinema industry embraces the trilogy of Art, Culture, and Cinematography one such director-writer across all the way to […]

Bhutani Group partners with chartbuster ‘Casanova’ to connect with the GenNext

New Delhi, August 11: Bhutani Group, one of the leading real estate developers, has announced its proud association with the chartbuster song CASANOVA featuring Lil Pump, YoYo Honey Singh and DJ Shadow Dubai. The announcement to this effect was made at the launch of the song at Dubai Festival City. Produced by Gauran Doshi along […]