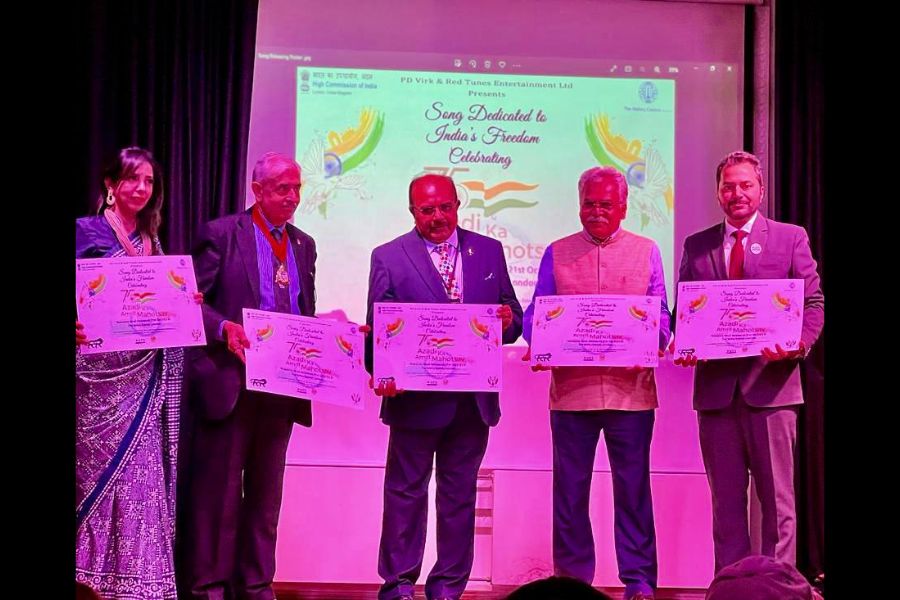 This Event also ensured that 200 years of British rule in India which had suppressed the use of Khadi, it was Mahatma Gandhi who took the initiative with the Charkha and Khadi weaving to unite people of India through Khadi and insisted that every Indian weaves Khadi,  wears Khadi and educating in discouraging them to buy Manchester cotton, where Indians were forced to buy this textile whereas all the cotton was shipped from India to Manchester, woven in power loom and sent  back to India and sold as Manchester cotton. Whereas, Mahatma Gandhi’s Mission with Khadi was to keep the nation united through Khadi. Our National Flag that was hoisted from Red Fort on the 15th august 1947 was made out of Khadi. So Khadi today is our Nation’s Pride in our New India, also celebrating our 75th year of India Independence where Hon’ble Prime Minister Modi Ji made a clarion call to all citizens  “HAR GHAR TIRANGA” on 15th August 2022. Our Hon’ble Prime Minister call to all citizens of India to fly the Nation Flag in each and every home, offices, Schools and Institutes.

Mr PD Virk in collaboration with Ms Rosy Ahluwalia were true patriots to celebrate the Pre – Diwali in London on 21 October 2022. With the Blessings of High Commissioner, His Excellency, Mr Vikram K Doraiswami and  Director, The Nehru Centre, Mr Amish Tripathi and Mr Sanjay Sharma, Deputy Director  the “INDIAN KHADI PROMOTERS AND CULTURAL ARTISTS GROUP”  had a successful  event at The Nehru Centre, London to release the Special Song Dedicated to India’s Freedom and 75th Azadi ka Amrit Mahotsav. This song is a tribute to Mahatma Gandhi and many freedom fighters who sacrificed their lives during the freedom struggle and now under the leadership of our Hon’ble Prime Minister Modi Ji, whose mission to celebrate the 75th Azadi Ka Amrit Mahotsav worldwide.

It was historic day to release the special song dedicated to India’s Freedom Struggle 75th Azadi ka Amrit Mahotsav in London, UK and to celebrate Diwali which is India’s New Year as our New India that India always considered the world as One Family “Vasudeva Kutumbakam”.

There was a good attendance. The program started with Ganesh Vandana followed with a short cultural program of Diwali and Grand Finale was by conducted by Ms. Rosy Ahluwalia, Fashion Designer, with a Khadi Fashion Preview Show which highlighted on Khadi sarees as an identity of Indian women and exhibited her other collections of Indian and Western style. She addressed the audience and highlighted on Khadi as an organic textile, very sustainable and a ‘Make in India’ product, and “Atmanirbhar Bharat” mission. Our Indian Khadi is a textile with zero carbon emission and plays a very Positive role on Climate Change and prevents Global Warming.

It was a successful event and the audience went back home understanding the importance of Khadi to unite each one of us, to respect our weavers and handicraft artisans to ensure they are looked up with dignity and honour. Khadi is our India’s Nation Pride.

New Delhi [India], October 27: Yashraj Bhardwaj, Co-Founder of Petonic Infotech, becomes the first Indian and Youngest ever Garwood Innovation Fellow in the history of the University of California Berkeley. Although this prestigious honor is normally given to those with a PhD, Yashraj is the only youngest person in history to have received it. In […]

(ATT World a MARCOM agency from India is all set to save crores of litres of water with HoJo – The Last Hope for Water) Patiala, Punjab October 29: Everyone has their own way of celebrating Diwali; ATT World, a MARCOM agency from Patiala, decided to celebrate by escalating its efforts to save the environment […]