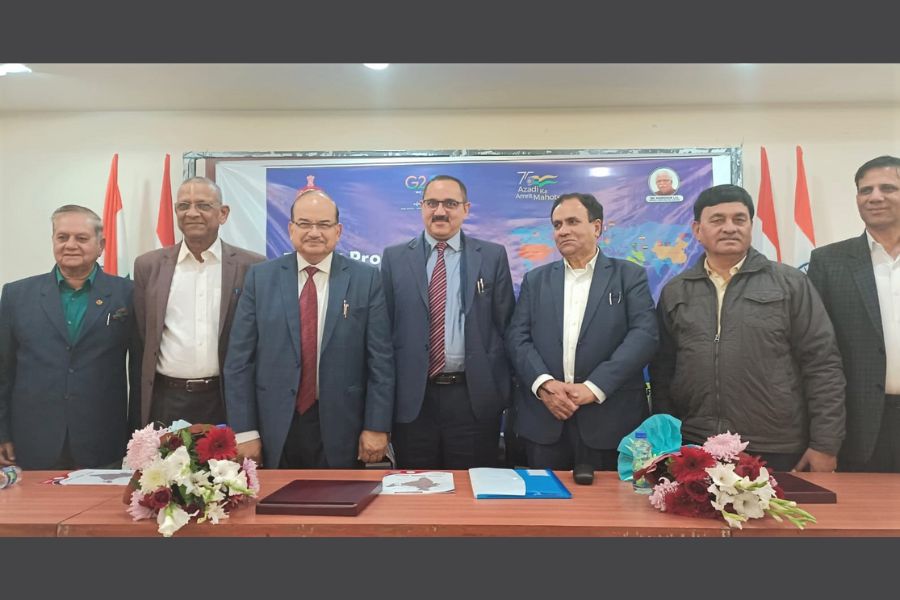 New Delhi, December 20: The Haryana Government, headed by Chief Minister Manohar Lal, has launched a special campaign to maximize the participation of aspiring and existing exporters in all the districts of the state with the aim of promoting exports in the state.  The first program in this series was organized by the recently constituted Haryana Export Promotion Council (Haryana Export Promotion Council), Foreign Cooperation Department, Government of Haryana at GIA Hall, Mehrauli Road, Gurugram. All major industrial organizations of Gurugram district and their associated exporters participated in the programme.

The program was inaugurated by Anant Prakash Pandey, Secretary and Director General, Foreign Cooperation Department, Government of Haryana. He informed about the activities of the Foreign Cooperation Department and told that Haryana Export Promotion Council has recently been formed under the Foreign Cooperation Department for the purpose of promoting exports in the state and export promotion and IEC registration campaign in all districts. Has been planned.  In his address, Anurag Bakshi, Chairman, Haryana Export Promotion Council welcomed all the guests and said that he is feeling immense pleasure in starting this campaign from Gurugram as Gurugram collects more than 50 percent of the state’s total revenue. And one third of the state’s exports are from Gurugram.

It is the IT capital of the country. Bakshi said that it is a matter of pride that Haryana occupies only 1.34 percent of the total area of the country but its contribution to the country’s GDP is about 4 percent and it also ranks fourth in GST collection and exports in the whole country. Is in fifth place. This is the result of the continuous efforts of the government, which is continuously working for ease of doing business and ease of living for the people of the state.

Bakshi said that at present the state’s exports are about Rs 115,000-crore, which the government wants to double by the year 2025. To achieve this goal, the government is ready to provide all possible facilities and assistance to the exporters. Bakshi told that starting from Gurugram today, this campaign will be run in Faridabad, Panipat, Rohtak, Bahadurgarh (Jhajjar), Hisar, Ambala, Kurukshetra and Karnal till 23rd December. During this, the council will take suggestions from exporters to increase exports and will try to solve their problems after knowing them.

Dr. Deepak Jain, Director General, Federation of Indian Industry also expressed his views in the program and congratulated the newly formed Council. He assured full cooperation from his Federation. In his address Dr. Deepak Jain, Director General, FII welcomed this formation of HEPC and offered whole cooperation from FII so that various markets of the world could be accessed by Haryana exporters. All 42 Chapters off FII would be glad to promote the exports from Haryana.

President of Gurgaon Industrial Association JN Mangala and his team welcomed and honored Anurag Bakshi and Anant Prakash Pandey with a bouquet and presented their suggestions. In particular talked about better infrastructure facilities in Gurugram.

On behalf of the Directorate General of Foreign Trade, Joint DG Vishal Sharma gave the exporters the process of IEC registration and other related information. On behalf of the Department of Industry, Joint Director Rajesh Kheda assured full cooperation to the industry to achieve the export target of the government.

New Delhi (India), July 30: Ayuvya Ayurveda, a newly emerging health and wellness brand offering Ayurveda-based fitness solutions for common problems and health issues, recently hit their 1,00,000+ customer mark.  Ayuvya Ayurveda founded in 2019 by Astha Jain and Pawanjot Kaur, is all set to revolutionise the Indian wellness industry by going back to the […]

IBC 2.0 CONTINUUM Kickstarts its Series of Hackathons with Educational Institutions for a holistic Web 3.0 Ecosystem Development

New Delhi (India), August 6: IBC Media has returned with one of the most prominent events in the Blockchain and Web 3.0 space, the much-awaited basket of events including the Hackathon series, Skill building programs, Startups pitch competitions, DeFi competitions and a mega conference with government and key Blockchain players. The Hackathon events leading to […]