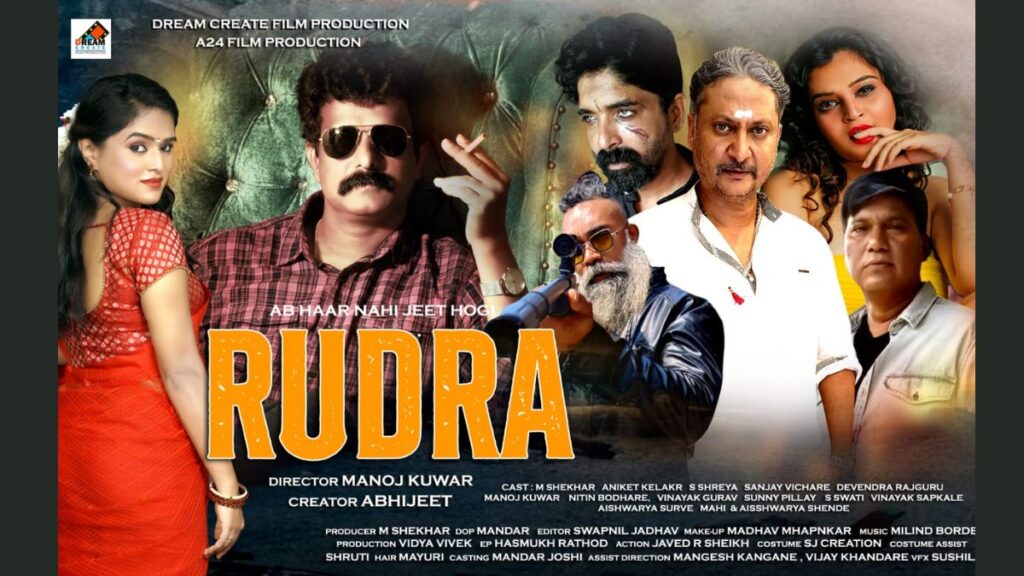 New Delhi (India), December 26: The trailer of India’s Fastest shot feature film “Rudra – the Power” has been launched. The film shall be released on various OTT platforms. This film is shot in just 4 days!!!

The trailer of Rudra – the Power trailer is launched at IMPPA (Indian Motion Pictures Producers’ Association) at Andheri West in Mumbai on 18th December 2022 with the special presence of Mr. Sunil Pal, a celebrated Comedian. This film is about the rivalry between the dance bar and the challenges faced by the dance bar girls. Dream Create film Production and A24 Production have produced this film. M. Shekhar is the film producer & Abhijeet is the creator and screenplay writer. They told us that we used to take 15-16 scenes each day. There were more than 50 scenes in the story. Everyone’s hard work made this happen. This is “the fastest shot feature film meant for OTT platforms”, which has been shot in just 4 days. This is submitted for the Limca book of records & Guinness book of world records & India Book of records as this shall qualify as “the fastest shot Indian Web Film” if approved by the said national & world records. Manoj Kuwar is the writer and director of this film. He also played the character of Usman Hatela. He tried his best to achieve that role. This is his debut performance.

M. Shekhar is a debutant in this film as a male lead actor. This was his dream. He came from southern India to become an actor. It’s been 2 decades since he came to Mumbai & turned out to be a successful businessman in Mumbai. This film was the right opportunity for him to fulfil his dream of becoming a lead actor. The whole team has helped me a lot; their support helped me give such fine performance & product. This was my first lead actor experience, which the audience will definitely like to watch. Soon he is starting another venture on a big scale.

The rest of the cast is Aniket Kelkar, who has done more than 150 projects. This is a different role than my previous work. Abhijeet and I have already worked together before, Aniket said; When Abhijeet approached me for this role, I got amazed to visualize my performance. The legendary actor Vinod Khanna played a similar role in “Dayavan”. He played the character South Indian in it. I got to play the same character, He added; This is one of my favourite roles I loved to play.

I’m the creator, Abhijeet, thankful to the producer M. Shekhar, director Manoj Kunwar and The whole team of Rudra for the power. When I heard the concept, the entire film was visualized & designed by me in my mind as a creator. Since I had characters so well-designed in my mind, it hardly took me time to lock the casting for this project. It only took 15 days of pre-production, 4 days of shoot & 40 days of post-production. I believe that if you are crystal clear about your ideas & presentation, you can finish any project faster with the cooperation of the entire team.

Devendra Rajguru, Who is playing the character of Ronit Roy, told the media that he belongs to television; I had never been got an opportunity to act big. I am playing a negative role alongside Aniket Kelkar.

Aishwarya Shende acting as Pallavi, the female lead, who is playing the wife of Rudra Shetty, told the media, “I am playing the role of the south Indian woman. Since my Mother hails from Karnataka, it turned easier for me to play a South-Indian wife’s character of Rudra Shetty. It’s a sensitive character having emotional depth. My Theater & film acting experience helped me better my performance with the right support & guidance from Creator Abhijeet sir & director Manoj Sir & cooperation of M. Shekhar Sir & all other co-actors. Abhijeet sir is certainly a great team leader. It was very playful, which helped maintain a healthy work atmosphere. This contains Action, Love, suffering, and everything. We performed our best to make this picture happen. We worked with full dedication. Shreya playing Priya, was glad to be part of this project.

November 9: Today’s modern youth are fond of listening to different kinds of rhythms like rap or hip-hop, etc. Rap is the style in which the artist uses his own words while hip-hop refers more to the beats which are often accompanied by a rap from a rapper, both are partners in good music reveal. […]

September 23: Not long ago, we’d heard that Bigg Boss contestant Jasleen Matharu (who created fireworks in BB with her guru Ghazal Samrat Anup Jalota) was dating actor Abhinit Gupta, popularly known as Dr Bollywood. Hailing from Bhopal, Abhinit is a renowned cosmetologist and trichologist and is also famous as Bollywood’s anti-ageing expert. Abhinit and […]

New York (USA), October 12: The first short film Soulmates helmed by young filmmaker Manya Gadhok based in New York has received recognition and awards from numerous international film festivals. The film features Shruti Bapna and Jatin Sarna. Soulmates, is a short narrative fiction film that centres around the relationship of Reyansh and Anaisha, a […]