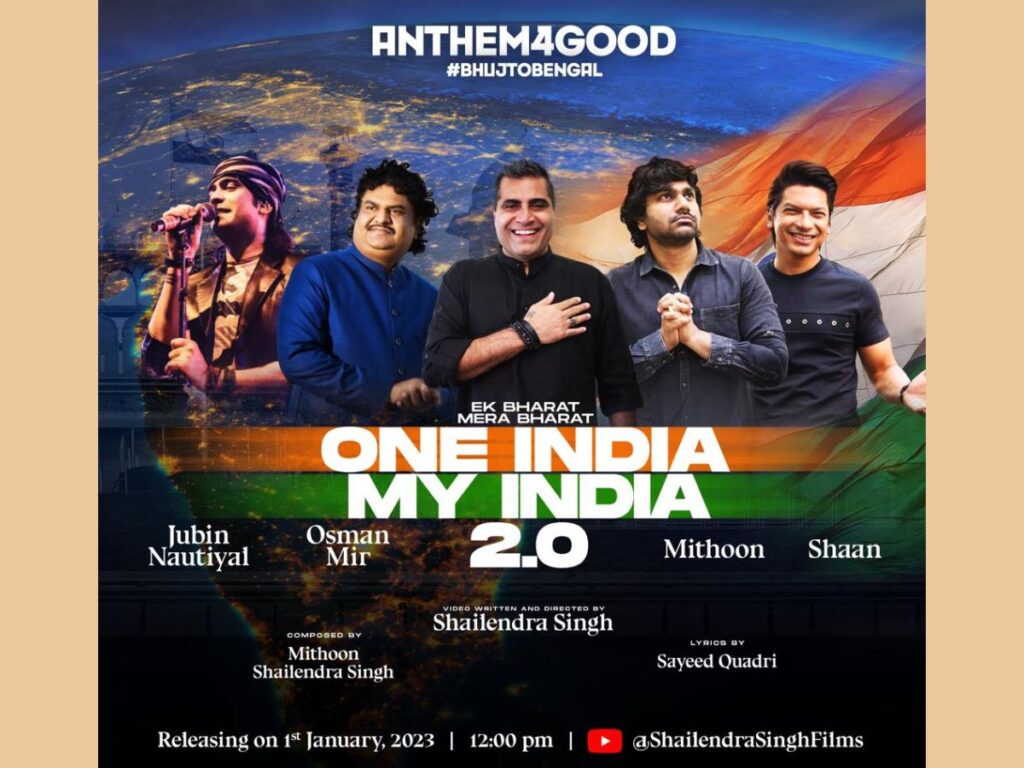 This Anthem4Good : Bhuj to Bengal, is a sequel to the successful One India, My India : Kanyakumari to Kashmir.

December 27: Shailendra Singh, Inceptor of Percept Ltd, Sunburn, Guestlist4Good and Boss Entertainment, says that it is Prime Minister Modi’s “One Earth, One Family, One Future,” that inspires him to release the next version of Anthem4Good, at 12:00 noon on 1 January 2023. Shailendra is dedicating this version of ‘One India, My India 2.0 : Bhuj to Bengal, to the PM’s vision for the nation in 2023, as India’s hosts the G20 Summit.

Says Shailendra, “I will make this anthem4good and music video available, for free, to the government of India, all press networks, corporations and the general public who wishes to celebrate and share it in this significant year. A year in which India should stand for peace, love and unity, as an example for the world. ”

This anthem4good is a sequel to the first, and highly successful, My India, One India : Kanyakumari to Kashmir, co-composed by Shailendra Singh and Mithoon, starring the incredible voices of Sukwinder Singh, Jubin Nautiyal and Godswill. The original version released in 2019 and was shared on CNN, Times Now, the Kapil Sharma Show (SONY), Dance India Dance (ZEE) and more.

Version 2.0 of the Anthem4Good takes the celebration from West to East, from Bhuj to Bengal, and features the voices of the highly celebrated Gujarati singer, Osman Mir and Shaan, Bollywood’s favorite playback singer, singing in Bengali, in addition to Mithoon and Jubin Nautiyal. Co-composed by Shailendra Singh and Mithoon, this anthem4good has neither a commercial agenda, nor sponsors, so can be shared freely amongst 1.7 billion Indians on the planet.

Composer Mithoon says “With great pride and joy we bring to you this anthem celebrating the legacy of our country from Bhuj to Bengal”.Shailendra’s vision and passion inspired me to put this song together.I’ve used elements of Sugam,Bundelkhandi and Baul Geet.Usman Mir Saab,Shaan and Jubin Nautiyal have added so much beauty with their authentic voices.Shailendra and me feel very strongly for this project.Its just the beginning and we intend to put out a lot more music to celebrate our diverse heritage,paying tribute to every state and culture across India.

The music video for the 2.0 anthem4good was written and directed by Shailendra Singh, to amplify the message of ‘peace, love and unity’ – something that Shailendra believes should our focus of the future. The video urges us all to remember that we are one large family of humanity; that we have far more similarities than differences. If we can overcome the division that religion, economics, caste and creed continue to cause, we can make space to care and love each other, bringing more joy and happiness to the world.

Continues Shailendra, “I have always believed that the light of God shines brightly still in the hearts of children. I have brought dozens of children together in this video, dressed in the avatars of gods and goddesses, gurus and mentors, professions of humanity, all coming together to build something incredible. Nation before religion. And love, before all. I wanted to start the 2023 year on a really positive note.”

The video was shot in Gujarat, Bengal and Maharashtra and features vignettes of all the singers, and Shailendra Singh. It releases at 12:00 noon on 1 Jan 2023 on his YouTube Channel, ‘Shailendra singh Films’.

New Delhi (India), June 22: Bitliberte will become India’s first Web3 startup to raise $1.76 million to establish a full-fledged FashionFi ecosystem that will use non-fungible tokens (NFTs) and decentralized autonomous organizations (DAO) to bridge the gap between fashion and finance. Web3 is a notion for a new version of the World Wide Web based […]

Mumbai (Maharashtra) [India], October 21: ‘The Y’ a psychological horror film produced under the banner of Rocket Films produced by Madhu G M And Dr. Ajith. Girideva Raaj who earlier directed Zero- Made in India in south has directed his debut film in bollywood. Zee Music has recently released ‘The Y’ movie song ‘Bepanaah’ in their […]

Focus Edumatics, acquired by Alpine Investors, positions Focus as the “next stage of growth.”