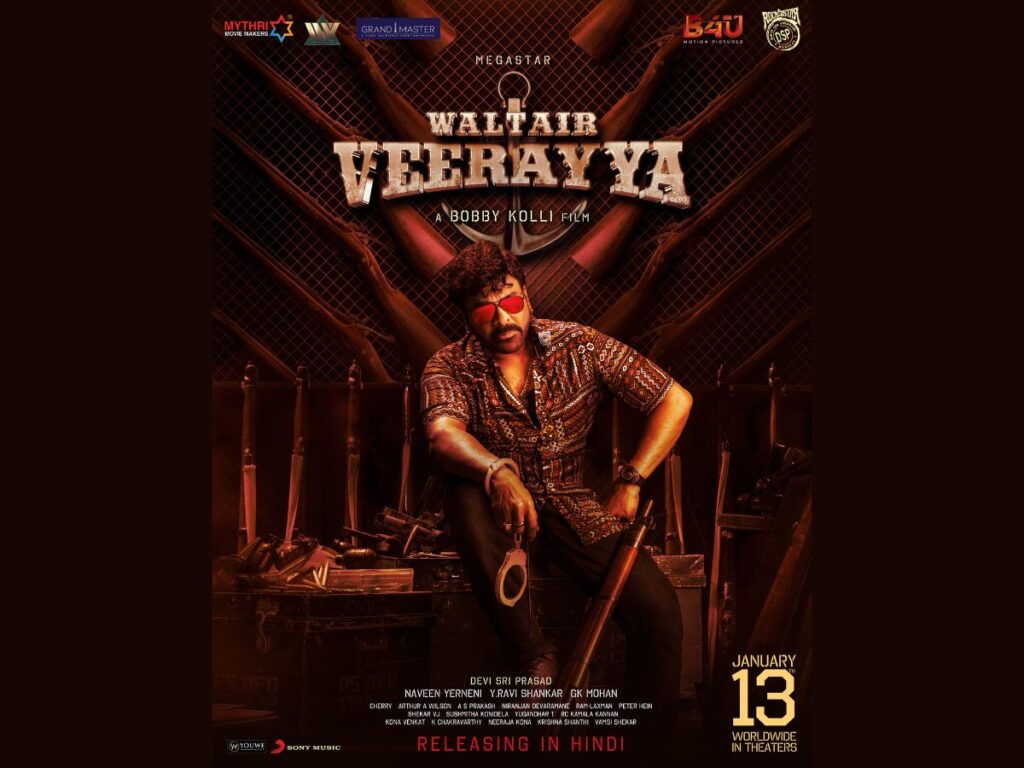 New Delhi (India), December 30: The first big release of 2023 is Waltair Veerayya, starring two big superstars, Chiranjeevi and Ravi Teja. The massy action-drama is written and directed by Bobby Kolli, with Shruti Haasan and Catherine Tresa as the leading ladies.

Produced by Naveen Yerneni, Y Ravi Shankar and co-produced by G K Mohan, under the banner, Mythri Movie Makers, the film opens on January 13. The Telugu original and the dubbed Hindi version will be arriving on the same day, with the same title. The film will be released by Grandmaster and B4U in Hindi.

An upbeat Yerneni says, “January 13 is the eve of Sankranti and we are certain that like the kites that you see flying in the sky during this festival, our film too will fly high. Chiranjeevi garu ruled the box-office with his last film, Godfather, which did stupendous business. The response to this teaser and the songs has been overwhelming.”

Says Vikas Sahni from Grandmaster, Waltair Veerayaa is the first big release of 2023 and we couldn’t be happier to bring the Hindi version day and date on Sankranti. The film has two much loved superstars and all the masala, movie going audience would want to start the year with.”

Mumbai (Maharashtra) [India], October 01:  Actor Sunil Kumar vastly known for his regional films in Odia, Bengali and Marathi Films, is now all set to make an entry in Bollywood through “Ishq Ki Barsaatein”, Which is a romantic music video. The video starring Sunil Kumar and Manisha Thakur is released by Zee Music on 30th […]

Why one should watch Safari with Suyash TV, India’s first Virtual Safari

New Delhi (India), October 23:  The much-awaited premiere of Safari with Suyash –TV, the World’s first and one of its kind wildlife OTT platforms, on 17th October is a sheer invitation for an authentic, immersive and educational safari experience. Set against the backdrop of the biologically diverse Bandhavgarh National Park in Madhya Pradesh, the first […]